The title of this thread was updated from its original title: “Does anyone have any Loyalty program education/flyer/tips to share?”.

We are launching the loyalty program.  Has anyone created a good customer facing flyer that explains the program?

Hey again everyone! I know it's been a while since we've updated this thread, but I did want to share that thanks to everyone's feedback - we put together some general table tents that you can use to advertise your Square Loyalty programs. You can download the template here.

I also went ahead and took a picture of the tents assembled for y'all. Check it out (also a sneak peek at our San Francisco office 😉): 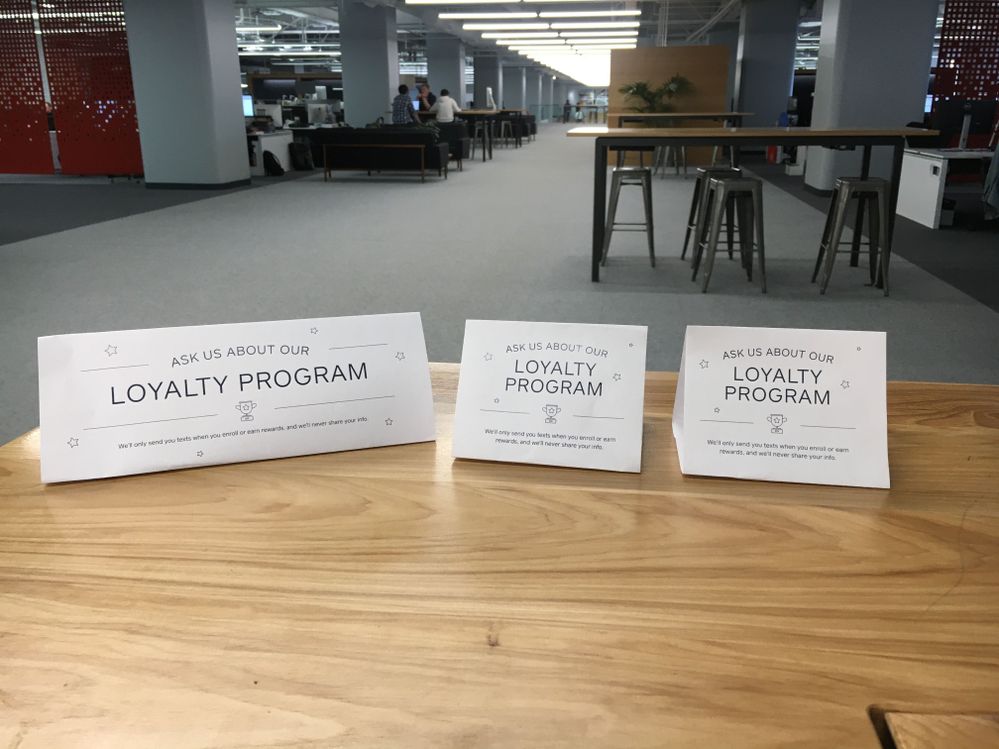 Please let me know your thoughts! Feedback is welcome!

@TheCoffeeBox - Great question! 👏  I'd also love to hear/see what other sellers are doing in the community to educate their customers on their loyalty programs.

@colorsofglass @superiorcoffee @LSBS @pete151a @SAWbeer - Any chance any of you have any advice? I know y'all are currently using this feature. 😉

pete151a
In response to Sean

I started this program a few months ago for one of my coffee stands, it has worked so well since they added the feature of stars per drink instead of just per visit! I love it and would recommend it.  let me know if you have any questions

@pete151a - Thanks for the reply! How did you go about educating your customers about the program? Did you create any sort of flyer?

pete151a
In response to Sean

hi.  we didnt do a flyer just told people as they pulled up, they love the convenience that square recognizes them just by the credit card they use.

@Sean can you have square capital look at my account, I would love to buy a new espresso machine,  thanks!~

@pete151a - Thanks for sharing! As for your request regarding Square Capital, you'll want to check out this thread for more details. Thanks!

teresa
In response to Sean

I am searching for a step by step demo of the "NEW" loyalty program, does this exist anywhere?

I want to make sure if it can fit what I need so that I can finally get rid of my costly reward program from another company. 🙂 but I am not sure it will do what I need it to do without seeing how the stars are redeemed, when they are to be redeemed, if they customer chooses to save them and a few other things I am not quite finding out with what I can search on here or the internet.

We don't don't currently offer a step-by-step demo of Square Loyalty right now, but we do have the features listed in this section of our Support Center: Getting Started with Square Loyalty.

In addition, we're currently offering a free 30 day trial — hopefully that would give you enough time to test it out and be sure it would cover your business needs. 😉

Regarding the timing, loyalty stars are awarded upon the completion of the payment and your customer can choose when to redeem their reward. For example, customers can keep a "rainy day" fund of rewards if they wish. Hope that helps make things a bit more clear. If anything else comes up, let us know!

teresa
In response to Tom

Thanks for circling back, @teresa. 🙂

I think I see what you mean. While you can designate the number of stars required for an award, there isn't a way to segment out the level of the award as your customer collects their stars. Currently, the award can only be set at a fixed amount or percentage.

I can see how this option would help drive more interest — rest assured that I'll be running this by our Product Liaison team. Appreciate you taking the time to point this out — we're always working to improve based on seller feedback.

teresa
In response to Tom

I have sort of found a way to build a tier, since the program does allow me to adjust their points manually. It doesnt allow me to go over 100 but I can scale down my rewards accordingly so that isnt an issue. Customers LOVE tiered loyalty programs, and it increases return even more than just a simple ONE reward program. I have my loyalty set to 100 points (max) in which my grand reward is 10% off purchases ALWAYS. Once a customer reaches that point, they are pretty loyal with the scale I have, so for me that is important to keep them loyal and 10% off ALWAYS is very enticing :). BUT i have made a tiered program card that explains the prizes at what level, such as 10 stars can be traded in for 15 dollars off purchase, 20 stars equal 20 off, 50 stars equals 5% off ALWAYS, 75 STARS for 50 dollars off 100 purchase or more and 100 for 10% of ALWAYS. I can simply subtract their stars as they want to trade it in. I have built in discounts that mirror that and we select those to take the correct amounts off and i named them STAR reward 10, 20 etc (respectfully)...that way they can know that it is part of the loyalty and what they actually received. It is a little cumbersome but I think its going to work...my second day on it today, so we will see. I am converting my old (belly) to the new (their points will equal stars). Just thought I would explain what I am doing so maybe others that want it can use that type of work around as well. It does collect thier stars based on their purchases so that is very nice to have built in and working 🙂 Oh, and once someone reaches the "5,10% off ALWAYS" we simply subtract the points so they can still build up for other gifts and then add a note in their customer profile that says "10%off Loyal customer"

judiep
In response to teresa

@teresa What's your $ to star ratio?  I really think your program is awesome, but I want to make sure my clients are spending enough money to make 5 or 10% off always feasible for me as well as them. 😉

teresa
In response to judiep

I really dont have a dollar to star ratio, I simply give caculated my profit of what they spent to get to 10 stars. so maybe that is what you mean, not sure though..lol The customer has to spend 150 dollars and the following vist they can get 15 dollars off their purchase of 15 or more...yes it means they can get a free item (that was my intent) buy 10 get one free. hope that answers your question 🙂

Wow... That's a very generous loyalty program. I really like the idea of it though. Can you tell us how well it's been working? What volume of discounts have you applied so far this year?

When it came to our loyalty program, I did some math to figure out exactly what I take home out of every dollar on average. So if a customer has to spend $250 before getting a reward, how much of my actual profit on $250 am I willing to give away? It turns out I'm in that same 2% threshold like all other grocery stores out there. I wish I could justify being more generous, but most of our customers are loyal regulars already. If I set my max discount to 10%, eventually 90% of my customers would be getting 10% off...

teresa
In response to LocavoreStore

it works out REALLY WELL! I have done several things in my program and I have made it work. I encourage them to return within a week (if you have ever shopped at a dollar general, they do it A LOT(get 5 dollars off if you bring in reciept on this day) I simply added the info to my receipts (bring receipts in within 1 week and get an additional 5% off)... IT really entices them to return in that window 🙂 I simply create a discount for the amount that I am offering on the tiered program and we click disount and select it, then we remove the stars from their account. I have added a screen shot of my current loyalty stuff and the discounts I have given this year. YES, it seems like a lot but it honestly is well worth it. My mark up on the product I offer the most and sell the most, is HUGE and It is worth it to keep them coming in for it. It behooves them to build up the stars and they LOVE LOVE LOVE IT! people make sure we give them their stars, they make sure to ask about trading in stars for discounts. I am lovi..it is a work around and I hope in themmmmm[ future they will add the abl to have a 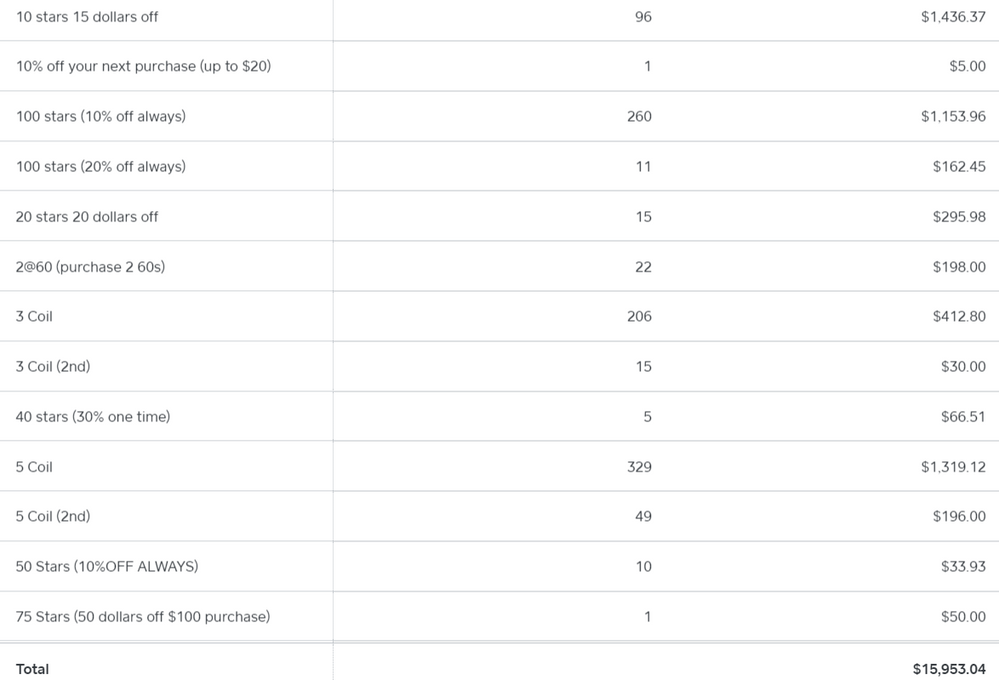 teresa
In response to teresa

sorry my last post got messed up at the end and i cannot figure out how to fix it! My last sentence should say I hope in the future they make the tiered peice work.

teresa
In response to LocavoreStore

yes, it definately depends on your mark up and profit...if its a grocery or convenient, then I know that mark up/profit is low compared to mine. I sell an item that cost me 1.40 for 8.99 and another item i cost me 2.80 and i sell it for 14.99. THOSE are the items the keep coming back for weekly and monthly and the ones I want to discount for them. here is snapshot of gross sales and the discounts I have given for the entire year. Hope this makes sense and answers your question. Maybe you need to raise the amount to get a star? I know the 100 stars and get one thing is cumbersom but I have a handful if you look in my post that get the 10% off. I see about 30 customers a day average. In a year i have given 1153 dollars for the 10% always (100 star award) so it isnt a lot that reach that point. I also offer a grandfathered 20% that I used to give and that is for really REALLY loyal ones..I no longer am offering that one LOL but It has kept me real loyalty for 3 years!

We tell our customers face to face that we've switched to a virtual punch card that's stored by their phone number. Everyone seems really excited about it, and they're catching on. I let them punch their own phone number in too. I think it adds to their experience. But we are a coffee house. So it might be a little harder in a stand.

Great question! After launching a campaign, the next part is letting your customers know. What I have found that works is to put the campaign on the bottom of the receipt, so that every customer can read it when they get a receipt. Also, after every transaction, inform every customer of the campaign. And dont forget to make them smile when you do, good luck! 🙂

I like the way you think, @SimplyTech! Welcome to the community and thanks for sharing. 💯

Please don't hesitate to surface any other topics or insight. 😀